UPDATE:  Since this write-up, I’ve added some color accents and moved my forward lights. Click here to see that write-up.

As promised, here’s a belated write-up on my recent rock-light installation.

Like a lot of things in life, it all began with an impulse. I’d gone to the state fair with some friends, where we found a vendor selling LED lighting at pretty decent prices. Rock lights already were on my future-modifications list, so I engaged the fellow and made a deal. Naturally, that was when he informed me he didn’t actually have the lights in stock at the fair and, if I’d leave my contact info, he’d be in touch.

Never one to sit around, I started looking online to compare options and pricing. And, about the time I decided to give up on a mod that might see limited use, I stumbled across a YouTube video in which a fellow Jeeper was showing off his new rock lights. The lights in the video were bright, used name-brand LEDs and were incredibly cheap, so cheap, in fact, that I could get 12 lights and a switch for less than eight of the no-name state-fair lights.

Akin to the carpenter’s mantra, “measure twice, cut once,” careful advance planning is the best way to achieve a satisfactory light coverage pattern.

I initially considered mounting two lights each at the front and rear of the Jeep, two on each side and one each in the fender wells. A couple of things changed my mind.

First, I’m seriously considering one day moving to a set of aftermarket fender flares, and I don’t relish the thought of repeating my work on these lights, if it can be avoided. Second, my early tests using a darkened garage and a nine-volt battery suggested there were more optimum lighting locations than the fender wells.

In total, I conducted five pattern tests using my iPhone flashlight and, later, the rock lights themselves, ultimately settling on three dual-LED lights to each side of the Jeep — port, starboard, fore and aft.

The GenSSi LED lights claimed factory waterproofing, but since the heat-shrink wrap didn’t quite cover the wires’ entry point into the lights, I chose to apply some inexpensive silicone insurance. A quick smear of black automotive silicone on each end took care of the problem, but required 24 hours to cure. 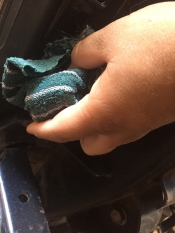 If these GenSSi units have any downside, it’s that they use 3M tape for mounting. Each light does have a small hole at each end, but these would be best-suited for indoor nail-affixed mounting, due to the small size of the holes.

That being the case, I took great care to fully clean the surfaces to which I’d be mounting the lights. I started with a soap-and-water mixture, then followed up with an alcohol wipe and fully dried each surface. 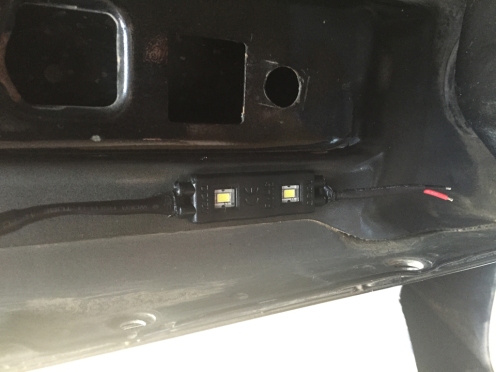 Peeling each protective cover off the double-sided tape, I placed the 12 lights along the underside of the Jeep, giving each one a strong push in the middle and at each end to ensure a secure bond.

The wiring connecting the front lights to those under the body runs above the left wheel well.

I connected each positive and ground wire in sequence, forming a loop around the vehicle. The wires were then enclosed in a protective vinyl loom.

Had I to do it over again, I’d have saved a great deal of time and energy by connecting my heat-shrink butt connectors on one end of each light before mounting them. Instead, I spent the majority of my Saturday on my back under the Jeep stripping, connecting and weatherproofing wire, followed by wrapping the whole installation in appropriate loom.

Step 6: Connect the switch and battery

After connecting the wireless switch to the lights and the vehicle battery, it was a piece of cake to tether it to the included wireless remotes.

As evidenced here, the lights put off plenty of light for trail use.

Having run the lights in parallel, I wired up the lights over the right front wheel to the wireless switch (a temporary solution until I’m ready for an sPOD), and the switch to the battery. After “teaching” the switch to recognize its remotes, all that was left was cleanup!

I’m very satisfied with this solution, and I’m glad I chose this route over what would’ve been just eight lights under my original plan. The finished product gives me plenty of light along the sides, rear and underside of the vehicle. Additionally, I anticipate the rear lighting pattern to be even better once I jettison the factory rear bumper in favor of a shorter steel replacement. As expected, the lighting at the front could be a little better, but I didn’t want to place lights where I’d be ripping them out again in a year or two when I replace these fenders. Instead, I’ll add two more lights when it’s time for the fender swap.

Working amid interruptions and distractions, I divided up the project over an entire weekend. Taking my time, I’d estimate the total project took me about four hours or so of actual work time.