I’d intended to film the process of removing and relocating my license plate to the spare tire. But, a phone call from family out of state just as I began the install instead led me to complete the job without recording any footage.

I’ll likely do a write-up later just to document the process for the curious, but suffice it to say my plate is moved. And, I’m now running the Off-Road Only LED plate light and third brake-light bracket. I may also have a few words for the Teraflex license plate delete panel, which proved to be of far higher construction quality than I was expecting for a simple $20 part.

If all goes according to plan, I’ll add a pair of LED cubes or a short light bar to the mix before Christmas.

Many Jeepers have improvised center high-mount stop lamps after they remove their factory devices to install a rear tire carrier. When I first installed my Crawler Conceptz carrier, I was content to go without a CHMSL, but when I stumbled upon a video detailing the easy creation of one using individual LEDs, my creative genes started firing.

My inspiration for this project used a plastic dust shield, in which he mounted eight bullet LEDs. I may eventually emulate this approach, but I wasn’t sure how I wanted to approach certain aspects of this design, such as securing the dust shield to the tire carrier to prevent movement when the spare is removed and how to run all the resulting wires in an efficient, attractive pattern.

So, for now, I’ve chosen to mount two inexpensive “eagle eye” LED lights in unused holes in my Crawler Conceptz tire carrier. Inserting the LED bolts from the front, I’ve secured them from behind with the included nuts and a single drop of blue/low-torque thread-locker.

Next, cut the factory wiring harness just behind the plug that connects to the factory high-mount stop lamp and route the wiring through its original location into the tailgate. Connect the positive and negative ends of the LED wires to each other, then connect the factory CHMSL wires. The factory harness’ black-and-white wire will connect to the positive LED wires, and black factory wires to the black LED wires. Once all connections are crimped into place, apply heat using a heat gun or cigarette lighter to shrink the tubes, then cover them with heat-shrink tubing and apply heat to form a water-tight connection. Inside the tailgate, connect the spliced-on factory plug to its proper location. 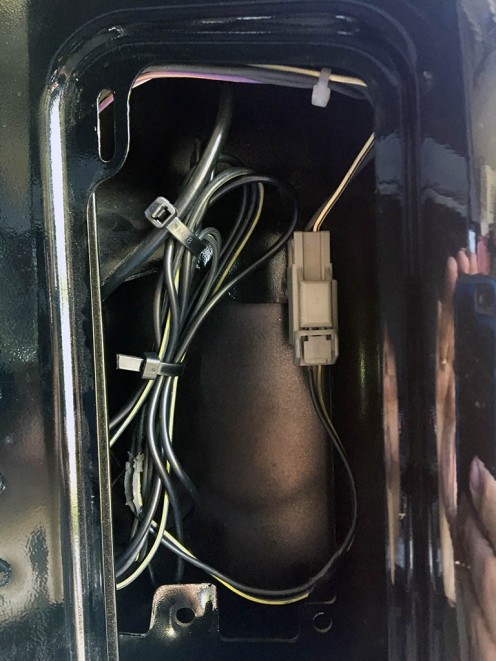 Ordinarily, I’d have trimmed the wiring before making my electrical connections. However, since I may change the configuration of my CHMSL eventually, I’ve chosen to leave the excess wiring for now. So, I gathered the excess inside the tailgate as neatly as possible, and zip-tied them in place.

Outside the tailgate, I used wiring loom to gather the wiring into a more simplified arrangement, and to provide a little extra protection from the elements.

Having a third brake light is a nice added measure of safety for inattentive drivers and, in today’s overly litigious society, just makes sense. I definitely like the idea of one day adding more to complete a full around-the-wheel light. In the opening image of this post, the LEDs appear brighter than the factory brake lights, but the reality is, the eagle eyes are of approximately equal brightness to the factory brake lights. This provides a very attractive appearance and, by utilizing the OEM plug in the tailgate, all the lights illuminate simultaneously, for a near-factory appearance.

For a month or two now, I’ve contemplated making an LED center high-mount stop lamp to replace the factory unit I removed to install my tire carrier. I was inspired by a Jeeper who posted his own experience on YouTube.

I’ve taken a much simpler approach than he did, at least for now. Watch for a write-up, coming soon.